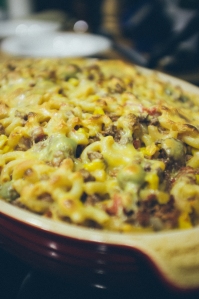 Goulash – Brandon’s all-time favorite, most craved childhood dish is goulash. And not traditional Hungarian goulash, as you might imagine, but more of a sloppy joe affair. 1970s style, canned-vegetable reliant, chock full of ground beef and topped with oven-browned Kraft singles (I didn’t realize that was possible), in all the glory that is – for some – childhood eating of that era.

Interestingly, this style of dish dates back to the early 20th century – but calls to mind mid-century Americana, when canned foods became the rage and casseroles came into their own.

He insists this MUST be followed by his mother’s ambrosia for dessert. Our chat follows…

My favorite dish from my childhood is probably my mom’s incredibly Midwest interpretation of goulash – it was a box of elbow macaroni, canned tomatoes, canned corn, ground beef, pimento olives and slices of American cheese on top. She would stir it all together, and the juice from the tomatoes would let the pasta bake. [I learned later this actually isn’t the case.] I’m guessing you’d brown the beef beforehand. Anyway, she’d combine everything but the cheese, put the slices on top, and then put it in the oven. Yep. The whole thing is a mystery to me. Objectively, that collection of ingredients sounds like the most disgusting thing in the history of the world. But it’s really good.

You know, the cheese is sort of psychological, like on a McDonald’s hamburger. It doesn’t add a ton of flavor, but you always wanted to get a scoop with the cheese.

Would she serve it with vegetables?

No! It has vegetables in it: tomatoes, corn and pimento olives, which is really two vegetables in one. Though I’m not sure that olives are vegetables – I think they’re actually legumes or something.

Noooooooo. Herbs? If she did, they were dried, and came from a glass bottle. But I doubt it – highly unlikely.

You know, I’ve never made this dish as an adult – and never helped her as a kid. We had it from my young childhood through my early teenage years, I think. She didn’t work outside the home when I was a little kid. When I was a teenager, she started working at the elementary school and didn’t cook as much.

It involves canned fruit cocktail – and you have to make sure you get the kind with one or two sliced cherries in it, because the goal is always to find the sliced cherry. Again, it’s psychological.

So it involves the fruit cocktail, coconut (a bag of dried, sweet coconut), marshmallows, and then I found out, after I grew up, something horribly disgusting: sour cream.

Then you just mix it together, shove it in the refrigerator and it’s the best thing ever. She always said it needed to sit and congeal, essentially, but I always wanted to eat it immediately. It took a little while. I guess you wanted to sour cream to combine with the marshmallow.

This is proof that I grew up in the Midwest [Mentor and Medina, Ohio, specifically] – these are not East Coast dishes.

For some reason, finding out about the sour cream…that was the most disappointing thing to me. The whole dish was this wonderful thing of sweetness, and then you find out it had sour cream in it was devastating. But I’d still eat it.

[The ambrosia reminds me of church luncheons from my own childhood. And the goulash conjures up umpteen images of casseroles my mom made for us.] Ambrosia sounds good, and weird. And not like real ambrosia. Though I’ll have to look up what real ambrosia is. About the goulash, why do you think you like it so much?

I don’t know – it has all the staples of a Midwestern childhood: sugar, salt and aluminum cans. I think it’s best not to analyze these things. I’ve never had it as an adult.

Would you find it disappointing now?

Probably not. I’ve never actually had real goulash. I think I’d be disappointed by that. I know I’d be shocked by it. I know it’s Hungarian and more stewlike, maybe spicy – it seems like something that should be judged on its own merits, but I don’t know that I could.

What if I made it for you? Would it make you happy?

Maybe (he says with a small smile). But I don’t know if I want to think of you and my mom in the same way.

In a large saucepan over medium-high heat, sauté onions in 1-2 tablespoons of olive oil. When the onions are softened and translucent, add the ground chuck and brown the meat.

In a separate pot of boiling, salted water, cook macaroni until al dente and drain.

Combine browned beef, cooked macaroni, tomatoes, corn, tomato sauce and olives in a large casserole dish. Season with salt and pepper to taste. Cover the top with slices of the cheddar cheese. Bake until heated through, about 45 minutes.

“Also not one of Keil’s favorites.”

Drain all of the canned fruit in a colander. In a large bowl, combine drained fruit, grapes, marshmallows, sour cream and coconut; stir until blended. Refrigerate for a few hours or overnight before serving.