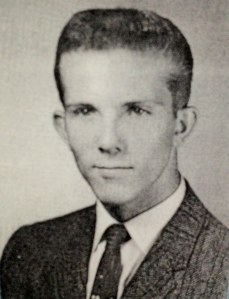 Though I believe this picture of my father was taken in high school, in it he looks a lot like he did when he married my mother. What a slim, trim looker!

I wrote the following on August 11, and shared it with my dad on paper that day. He has approved its posting… more or less.

Today is my dad’s birthday. I won’t say what number it is, because he’d be displeased about that, but I will say I’m really happy to celebrate another one with him. (My own will follow in a week.)

Dad had a bout with colon cancer a few years ago, and to see the man who always reminded me of Superman when I was a child (he even had a slight curl of hair dropping down over his forehead for a time), suddenly in the hospital, about to be wheeled into surgery to have a giant tumor removed from his colon, was terrifying. Though we tried to make the best of it – joking in recovery with his similarly aged roommate and his wife, and loading up the portable DVD player with the entire Bourne Identity series to pass the time in the hospital room – it sucked. Seeing my mom so scared and unsure, and my dad so seemingly weak, and my sister crying and laughing and trying to be strong all at once… it was an unpleasant mix of sensations I don’t want to experience again.

So, Dad, thanks for making it through that. For sticking around. And for thriving.

On this occasion of his birth, I thought I’d write a little piece about him. He’ll probably feel strange about it, because for such a gregarious person he is oddly shy when it comes to talking about himself, but, Dad: DEAL WITH IT. This is my birthday card to you. 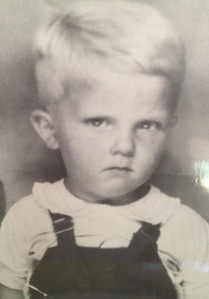 I’ve always loved this towhead photo of my dark-haired father – his absolutely grumpy expression is so opposite of the fun-loving, jovial man I know today.

My father goes by his middle name, Calvin, because he’s always hated his first. (Again, I’ll remain mum on that front.) He was raised by his grandmother, a woman who I imagined to be diminutive in stature and fierce in spirit, after his very young mother had him, and another son, by different fathers, and couldn’t quite get her act together to raise them. And in the Northern California home of his grandmother, he was taught at a very young age about death. Animal death, that is. It was only recently that I learned something fascinating: My dad knows how to kill a chicken.

“My grandmother taught me how to do it,” he divulged, explaining there were two methods. You could either grab the chicken and quickly chop off its head with an axe, leaving the decapitated bird to flop around a bit until its body caught up with the life-ending trauma it had just sustained; or the less bloody (but likely more agonizing for the bird) approach: take the animal by the throat and swing it vigorously overhead until its neck breaks. My dad was schooled in both.

When I asked him about his food memories of childhood, the chicken was one of the first to come to mind. Our chat about those memories was fairly short – cut off by the noise of the loud restaurant we were sitting in at the time, or maybe just Dad’s disinclination to divulge stories of his youth over a digital recorder – but the chat will continue at some point in the future. I’ve made him promise. For now, I know that he often had farm fresh poultry on the dinner table, and his lifelong love of crispy bacon and eggs over easy stems from the homestyle breakfasts of his upbringing.

As an adult, he eats and enjoys most everything – and has a particular fondness for perfectly grilled, medium-rare steaks (emphasis on the rare). He thinks most anything my mother makes is “delicious – Berta, this is just wonderful!” And one of his all-time favorite desserts – I believe a relic from his childhood as well – remains vanilla ice milk (specifically ice milk, not ice cream) drizzled generously with Hershey’s chocolate syrup. This is something he turned us onto as kids, and will reliably let out an emphatic, “Mmmmmm!” upon first bite.

Something I’ve always admired about my dad is his boundless enthusiasm for what he loves – whether it be good food, his family, a great movie or piece of art, he rarely withholds compliments or effusiveness or simple, straightforward appreciation. He is always demonstrative with his affections and enjoyment of things – a tendency I actually inherited.

He is a person who loves people – always learning the names of waitstaff and being genuinely interested in their stories and opinions. He is a devotee of corny phrases and regularly repeats his own goofy not-quite-full-fledged-jokes around the dinner table. “Butter, Berta,” is a favorite bit of alliteration to ask my mother to please pass the butter – always said with a twinkle in his eye, and repeated twice, at a minimum, furtively looking around to be sure other people have heard his hilarious phrase. “I love it when a plan comes together!” is like his mantra, and the best of them all, “You know me, I’m Mr. Flex!” is probably the funniest, since it states the complete opposite of reality (he is not a very flexible person when it comes to a plan). And he is a man who likes to talk. I learned the art of conversation – and debate – at the dinner table from him, and credit him fully with my stubbornness and occasional inability to see other people as being more right than I.

Cheers to you, Dad!

After working very gratifyingly for the state of California as a budget manager for more than three decades – a career he always describes as something he “fell into, but fell in love with,” he retired several years ago to slow down a bit and enjoy life a little more. He now does real estate (traditional retirement turned out to be too slowly paced for him) – a second career so perfectly suited to my father, because of its focus on people and relationships and helping others make the best decisions for them, it’s hard to imagine him finding a better way to pass his time… aside from traveling more with Mom or writing his own book.

Tonight, on the night of his birthday, we will go out to dinner in downtown Sacramento, as a family. We will probably laugh a lot, drink a bit, eat too much delicious food – and try to get him to talk about his birthday more than he’s comfortable doing. Dad – it’s because we love you, our forever superhero, and want to give the date of your birth its proper due. Without it, we wouldn’t be here.